Actress Carla Ortiz returns from Syria, pleads on CNN and Fox to end war and intervention 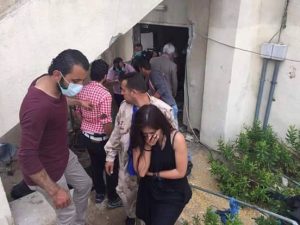 Carla Ortiz in Syria after witnessing civilian massacres by ISIS (photo on Twitter)
Bolivian-born actress Carla Ortiz recently visited Syria for ten days on a humanitarian mission. She was in Aleppo in the closing days of the defeat of the Western-backed regime-change paramilitary forces in mid-December 2016. It was her fourth visit to the country this year. She is preparing a documentary film on her visits.
Upon her return to the United States, she spoke to CNN and Fox television outlets. She pleaded for the world to welcome the restoration of Syrian government rule to the city of Aleppo and for a comprehensive peace for the country.
Watch the six-minute CNN interview here or by clicking the first screen below. Watch her six-minute interview on FOX 11 (Los Angeles) here or by clicking the second screen below.
WATCH THE VIDEOS HERE
Report by Carla Ortiz on her Facebook page on Dec 15: (with video)
This is only for the people that want to know the truth about #Aleppo.
1. These are real images of civilians that have been evacuated. I believe the number is over 95k.
2. The people that evacuated this AM in 20 buses with help of the Red Cross were rebels, militants and terrorists that have been moved with their families to Idlib [city and province]. Many of them were wounded, including children. The “Red Cross” confirmed that the evacuation of this almost 5k people was done smoothly and with no open fire of any kind!
3. The civilians that are crossing to the safer side claim that the rebels deprive them of food, water and medicine. They also said that many would be shot by these rebels for just trying to cross to the west side of Aleppo.
4. They have reported that schools were closed and children were deprived of education.
5. When you ask about the “White Helmets” they [the people of eastern Aleppo] don’t know who they are…. and then they say, ‘Oh, Al Nusra front’ (a terrorist group).
6. Many of these people don’t sympathize with any political party or political philosophy; they are just happy that they made it alive!
7. Every single person we ever talked to has lost a family member in these last 6 years.
8. There is not one civilian that supports the War.
9. They say that they had no access to electricity nor to internet! ( only very few with access with their 3G)
10. The people of Syria want this war to end!!! Maybe we could listen to their voice for once and stop this madness!

Posted by Solidaridad Press at 10:28 AM