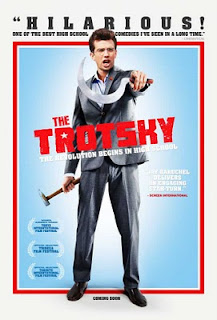 THE TRUMBO: The Award for BEST PROGRESSIVE PICTURES is named after Oscar-winning screenwriter Dalton Trumbo, a member of the Hollywood Ten, who was imprisoned for his beliefs and refusing to inform. Trumbo helped break the Blacklist when he received screen credit for "Spartacus" and "Exodus" in 1960.
CASINO JACK
CONVICTION
JONAH HEX
MACHETE
PRINCE OF BROADWAY
PRINCESS KAIULANI
THE COMPANY MEN
THE PERFECT GAME
THE TROTSKY
WOMEN WITHOUT MEN

THE GARFIELD: The Award for BEST ACTORS is named after John Garfield, who rose from the proletarian theatre to star in progressive pictures such as "Gentleman's Agreement" and "Force of Evil," only to run afoul of the Hollywood Blacklist.
PRINCE ADU: PRINCE OF BROADWAY
JAY BARUCHEL: THE TROTSKY
TOMMY LEWIS: RED HILL
ANTHONY MACKIE: NIGHT CATCHES US
KEVIN SPACEY: CASINO JACK
DANNY TREJO: MACHETE
KAREN MORLEY AWARD: For BEST ACTRESSES. Named for Karen Morley, who was driven out of Hollywood in the 1930s for her leftist views, but who maintained her militant political activism for the rest of her life, running for Lieutenant Governor on the American Labor Party ticket in 1954. She passed away in 2003, unrepentant to the end, at the age of 93.
JESSICA ALBA, MICHELLE RODRIGUEZ: MACHETE
SALLY HAWKINS: MADE IN DAGENHAM
Q'ORIANKA KILCHER: PRINCESS KAIULANI
NOOMI RAPACE: THE GIRL WITH THE DRAGON TATTOO
HILARY SWANK: CONVICTION
SHABNAM TALOUI: WOMEN WITHOUT MEN
YAHIMA TORRES: BLACK VENUS
THE RENOIR: The Award for BEST ANTI-WAR FILMS is named after the great French filmmaker Jean Renoir, who directed the 1937 anti-militarism masterpiece, "Grand Illusion."
AMERICAN RADICAL: THE TRIALS OF NORMAN FINKELSTEIN
DRY LAND
GREEN ZONE
JONAH HEX
RACHEL
THE MOST DANGEROUS MAN IN AMERICA: DANIEL ELLSBERG AND THE PENTAGON PAPERS
THE GILLO: The Award for BEST PROGRESSIVE FOREIGN FILMS is named after the Italian director Gillo Pontecorvo, who lensed the 1960s classics "The Battle of Algiers" and "Burn!"
ALTIPLANO
BUDRUS
VIDEOCRACY
WOMEN WITHOUT MEN
THE DZIGA: The Award for BEST PROGRESSIVE DOCUMENTARIES is named after the Soviet filmmaker Dziga Vertov, who directed 1920s nonfiction films such as the "Kino Pravda" ("Film Truth") series and "The Man With the Movie Camera."
CASINO JACK AND THE UNITED STATES OF MONEY
GASLAND
LAST TRAIN HOME
NESHOBA
SOUTH OF THE BORDER
THE OATH
THE TILLMAN STORY
WILLIAM KUNSTLER: DISTURBING THE UNIVERSE

THE BOUND FOR GLORY AWARD: The Award for BEST ANTI-CAPITALIST FILMS is named after the 1976 Hal Ashby directed biopic about Woody Guthrie, played by the late David Carradine.
ALL GOOD THINGS
DAYBREAKERS
EXTRAORDINARY MEASURES
FLOORED
INSIDE JOB
REPO MEN
THE GIRL WITH THE DRAGON TATTOO
THE JONESES
WALL STREET: MONEY NEVER SLEEPS
LA PASSIONARA AWARD: For the most positive female images in a movie, and in light of the historically demeaning portrayal of women in movies.
AGORA
CHILDREN OF INVENTION
CONVICTION
FAIR GAME
LOVELY, STILL
MODERN LOVE IS AUTOMATIC
PRINCESS KAIULANI
QUEST FOR HONOR
SALT OF THIS SEA
WOMAN REBEL
OUR DAILY BREAD AWARD: For the most positive and inspiring working class images in movies this year.
BIUTIFUL
HOLY ROLLERS
MADE IN DAGENHAM
PRINCE OF BROADWAY
SAVING GRACE
THE COMPANY MEN
THE PERFECT GAME
WASTELAND
THE ROBESON AWARD: Named after courageous performing legend, Paul Robeson. The award is for the movies that best express the people of color experience, in light of their historically demeaning portrayals in films.
BLACK VENUS
FOR COLORED GIRLS
NIGHT CATCHES US

THE TOMAS GUTIERREZ ALEA AWARD: Named after the late legendary Cuban filmmaker. For best depicting mass popular uprising or revolutionary transformation in movies
MACHETE
OUTSIDE THE LAW
RED HILL
THE SERGEI: The Award for Best Progressive LIFETIME ACHIEVEMENT is named after the Soviet filmmaker Sergei Eisenstein, who created Russian revolutionary classics such as 1925's "Potemkin" and 1927's "10 Days That Shook the World."
LENA HORNE [posthumous]: [6/30/17- 5/9/10] As an anti-racist activist, she refused to appear before racially segregated US Army audiences in WW2 Italy. Horne was also branded a 'communist sympathizer' because of her association with Paul Robeson and her progressive political beliefs, which led her to be blacklisted in the 1950s. Lena Horne passed away on Mothers Day at the age of 92.
THE LAWSON: The Award for BEST ANTI-FASCIST FILMS this year, is named after screenwriter John Howard Lawson, one of the Hollywood Ten, who wrote Hollywood's first feature about the Spanish Civil War, 1938's "Blockade," with Henry Fonda, and anti-Nazi movies such as 1943's "Sahara," starring Humphrey Bogart.
A FILM UNFINISHED
ARMY OF CRIME
VINCERE
THE MODERN TIMES: The Award for Best Progressive Film SATIRES is named after Charlie Chaplin, who made 1936's "Modern Times" and 1940's "The Great Dictator."
DOUBLE TAKE
OSS 117, LOST IN RIO
PUNCHING THE CLOWN
RARE EXPORTS
THE TROTSKY
THE ORSON: The Award for BEST OVERLOOKED OR THEATRICALLY UNRELEASED [seen at festivals, or on TV or DVD only] Progressive Films is named after actor/director Orson Welles. After he directed the masterpiece "Citizen Kane" Welles had difficulty getting most of his other movies made.
EXTERMINATORS
IF GOD IS WILLING AND THE CREEK DON'T RISE
PLUNDER: THE CRIME OF OUR TIME
THE PASOLINI: The Award for Best PRO-GAY Films is named after Italian director Pier Paolo Pasolini, who directed 1964's "The Gospel According to St. Matthew" and "The Decameron" and "The Canterbury Tales" in the 1970s.
HOWL
I LOVE YOU PHILLIP MORRIS
THE KIDS ARE ALL RIGHT
BEST MOVIE LINE: 'We Will Kill The American Disease.' - The Expendables
COURAGE IN FILM CRITICISM: Armond White: For publicly standing up to the studios and prevailing, regarding refusal to admit him to press screenings of Greenberg because of previous negative reviews of director Noah Baumbach's films.
ELIA KAZAN HALL OF SHAME 2010: Citations for the worst anti-workingclass and right wing movies of the year is named after director Elia Kazan, who was Hollywood’s 'King Rat.' Kazan not only informed on accused radicals to the House Un-American Activities Committee, he took out a New York Times ad justifying his self-serving treachery.
*The Elia Kazan Hall Of Shame represents the 'don't tell me to shut up' sidebar contribution of individual members, and does not necessarily reflect the opinions of the entire Circle. Also, members may be objecting to particular characters in a film, and not the entire movie.
GENERATION ZERO
HARRY BROWN
THE EXPENDABLES
THE FIGHTER
THE GHOST WRITER
TRUE GRIT
WINTER'S BONE: [THE MASSES ARE MORONS. AKA POVERTY PORN]: In other words, do actors really have to look so dumb and stumble over their words or behave primitively in the extreme, when impersonating proletarians in movies?]
Posted by Solidaridad Press at 8:06 PM 6 comments:

JACC Best Of The Net Hotspot: Courage In Street Theater