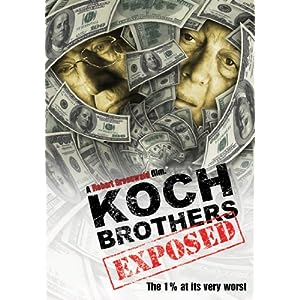 **The Koch Brothers Exposed: A conversation with eminent activist filmmaker Robert Greenwald about his investigative documentary addressing the enigma: Who exactly are the reactionary billionaire brothers, where did they come from, what do they have to gain and what can be done to stop them. And, what is the Koch connection to the Tea Party, climate change, the Keystone pipeline, the John Birch Society, Stalin, think tanks, front groups and buying democracy. Also, new strategies for raising mass consciousness through movies. And finally, does all this make Robert Greenwald a Koch-head?


LISTEN TO THE SHOW HERE


**Occupy Nation: The Roots, The Spirit And The Promise Of Occupy Wall Street. Gitlin gets it. Veteran social historian and movement chronicler Todd Gitlin phones in to Arts Express to talk about his latest book tracing the trailblazing movement, from its origins to its unconventional potential as a force for social change. And sheds light on the challenges of making the political personal, what constitutes hope, and exiting inertia. As he probes OWS growing pains, rituals, obsessions, inner tensions and commitment to economic justice. And how when he first felt the intensity and scale of the movement, he knew it was for real.

**Best Of The Net Hotspot: Mama Hope. Taking a look at African men and Hollywood stereotypes.

Stay tuned for continuing features of Arts Express: Expression In The Arts. Airing On WBAI Radio's Pacifica Network and Affiliate Stations. And if you'd like to Express yourself too, you can write to: ArtsExpressradio@gmail.com
Posted by Solidaridad Press at 11:52 PM No comments: