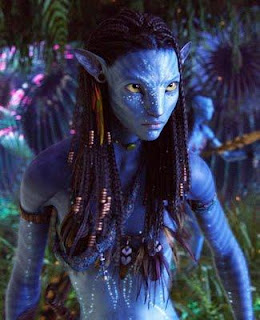 ...The overwhelming success of Avatar with audiences has actually given me some hope (not the plastic Obama brand of “hope” as substitute for moral policies). It is impossible to not get it. It is impossible to not accept that moral questions remain when people decide to take from others and to demonize them in order to achieve their desired “facts on the ground.”

Avatar is a timeless story, mythic, allegorical, and yet grounded to our actual history and to our current events. Perhaps art can go beyond imitating life and progress up to nudging it just a little in a better direction....

Joe Giambrone is the editor of The Political Film Blog. He hopes to hit an iceberg and sink just a fraction of the depth James Cameron has plummeted. Send political/film articles to: polfilmblog at gmail.com.
Posted by Solidaridad Press at 9:47 AM No comments:

They equated their struggle to the intergalactic one portrayed in the film. Israel says the wall is needed for its security. Palestinians consider it a land grab.

Occupied Jerusalem: Palestinian protesters have added a colourful twist to demonstrations against Israel's wall, painting themselves blue and posing as characters from the hit film Avatar.

The demonstrators also donned long hair and loinclothes on Friday for the weekly protest against the wall near the village of Bilin.

They equated their struggle to the intergalactic one portrayed in the film. Israel says the wall is needed for its security. Palestinians consider it a land grab.

The protests have become a symbol of opposition. They often end in clashes with Israeli security forces involving stones and tear gas.

The "Avatar" protest comes a day after the Israeli government began rerouting the wall to eat up less of the Palestinian village.

Palestinian officials say tracks have been laid down for a modified route near the village of Bilin. The officials spoke on condition of anonymity because they were not authorised to discuss the matter before official confirmation.

The Israeli Supreme Court ordered the government two and a half years ago to modify the route around Bilin.

Meanwhile, Israeli soldiers shot and killed a Palestinian in the occupied West Bank on Friday as he tried to stab them, an army spokeswoman said.

The man, identified by locals as 41-year-old Fayez Faraj, was wounded in the Hebron shooting and taken to an Israeli hospital, where he died.

Locals said Faraj, a father of 10, had worked in a shoe factory. Television footage showed a small yellow cutting blade lying next to his body.

A large Palestinian city where several hundred Jewish colonists live with an Israeli military garrison to protect them, Hebron has seen frequent violence.

Racial Politics And The Black Image In Hollywood

....Critical darling Precious (directed by African American filmmaker Lee Daniels) and audience favorite The Blind Side have both garnered Oscar nods for portrayals that some Black critics and moviegoers have dubbed condescending and stereotypical. The irony is not lost on novelist Ishmael Reed, author of the forthcoming Barack Obama and the Jim Crow Media. In a recent article in the New York Times Reed wrote, “The Blacks who are enraged by Precious have probably figured out that this film wasn’t meant for them. It was the enthusiastic response from white audiences and critics that culminated in the film being nominated for six Oscars by the Academy...an outfit whose 43 governors are all white and whose membership in terms of diversity is 40 years behind Mississippi”....

Sikivu Hutchinson is the editor of blackfemlens.org and the author of the forthcoming book Mortal Combat: Black Atheists, Gender Politics and Secular America. She writes for Our Weekly, is member of the Women Film Critics Circle, The James Agee Cinema Circle, a commentator on Pacifica's KPFK 90.7FM. and a reporter for the LA Women's Desk of the WBAI Radio Women's Collective in NY.
Posted by Solidaridad Press at 12:02 PM No comments: