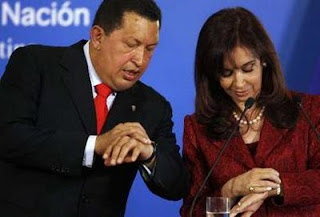 The movie opens with three dorks from Fox discussing Hugo Chavez’s “drug problem”, which is described as starting his mornings with cocoa. You can’t make this shit up.
The movie consists of footage from television and old newsreels, largely intended to demonstrate the willingness of the media to serve State Department ambitions, as well as interviews with key Latin American leaders. It dawned on me during Oliver Stone’s sit-down with Ecuador’s Rafael Correa that I have never seen him interviewed on American television, nor were Argentina’s Kirchners, Bolivia’s Evo Morales, or Cuba’s Raul Castro ever given a moment on “Sixty Minutes” or any other news show. By allowing them to speak for themselves, Stone breaks a news embargo that is almost as vicious as that Cuba faces on the economic front....

Louis Proyect
The Unrepentant Marxist
Posted by Solidaridad Press at 10:12 PM No comments:

South Of The Border: A Dissenting Opinion

Much of the U.S. left is atwitter about Oliver Stone’s latest film, South of the Border (2009): an eighty-minute-long travelogue/documentary about Latin America’s left-ward shift in the last decade. Those sympathetic to the counter-hegemonic tides of change in the region appear to have embraced what they characterize as Stone’s valiant journalism against liberal and right wing critics....

Noah Zweig is a member of the James Agee Cinema Circle

Summer Gray and Noah Zweig are graduate students at UC Santa Barbara in Sociology and Film and Media Studies.
Posted by Solidaridad Press at 8:40 PM No comments: