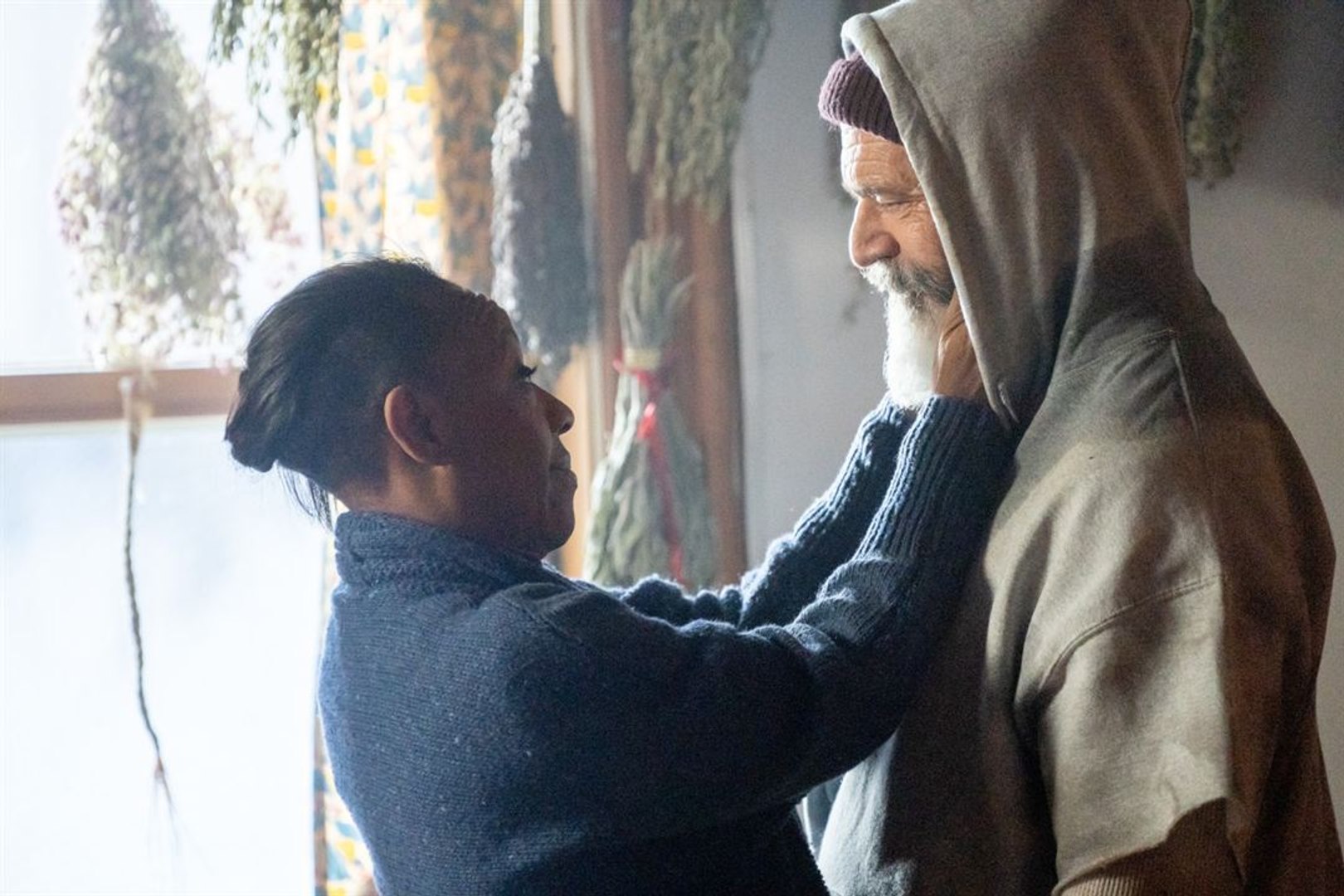 With a few outstanding exceptions that you're not likely to hear about at the Oscars, or on most critics organization lists whose members are still predominantly white, male and middle class - and most starkly absent is any working class or left perspective membership - the narratives invariably follows the same old trajectory no matter what the year. Namely, whatever the daring political or historical subject matter, there is the inevitable detour along the way to either retreat into the family as more important than anything else, or the death of the heroic figure along with his cause - the latter ultimately deemed disappointing or corrupted. Not to mention a question I like to pose to filmmakers of suspect ulterior motives when they consistently bash progressive history - who funded your movie.

Best Improbable Holiday Movie: Fatman. This Santa Noir finds Mel Gibson as the portly grouch, sparring with the worst kid/best young actor of the year in a movie - Chance Hurstfield as a filthy rich, kind of mini-Trump who won't take no for an answer when subjected to coal in his stocking for Christmas. And who then proceeds to hire hitman Skinny Man, to assassinate Santa. But he's preoccupied with pressing issues of his own - as orders plummet due to the decline of good kids deserving gifts. So Santa is reluctantly forced to produce military products for the Pentagon instead - no surprise in this declining capitalist economy propped up by the US military industrial complex - to make ends meet. Meanwhile, this darkly comical, strange satire reveals a seemingly penitent Gibson deferring to his perhaps reluctant feminist side, and boasts the best screen couple of the year - counting eminent Afro-British actress Marianne Jean-Baptiste as the frequently scolding spouse who wears the pants around this Santa.

The Mauritanian: This devastating docudrama is based on Guantanamo Diary, the prison writings of Mohamedou Ould Salahi, an innocent man incarcerated and subjected to a brutal ordeal of 'enhanced interrogation' torture there for decades. Jodi Foster is his ACLU lawyer battling the corrupt US government and military to finally free him. A viscerally traumatic experience for audiences as well, placing them in those torture chambers right alongside Salahi, played by Algerian French actor Tahar Rahim.

Emperor: Yet another greatest story never told of all too often buried courageous black history. A rebel slave uprising political action thriller, Emperor is based on the life of Shields Green, African royalty kidnapped and enslaved on a Southern plantation - who escaped and fought with John Brown at Harpers Ferry. And though released by chance in this BLM moment, Emperor could not be more timely. Along with bracing Brechtian interludes confronting essential ideological issues.

The 24TH: Yet another exemplary example of persistent filmmakers of conviction stepping in to exhume a suppressed black past - where US history and the dishonest education system fear to tread. And potentially ushering in a commendable Black Renaissance in movies. Based on real events in the long infamous US past, the historical drama takes place during WW I, and a Houston army contingent known back then as the 24th Regiment. But this is not a war movie, while at the same time it is, very much so. Namely, the endless war against African Americans from the inception of this nation, and essentially to this very day. And the repeatedly buried black history of defiant, desperate resistance and rebellion, however bereft of hope. Known as the Camp Logan Mutiny taking place on August  23rd back in 1917, a mass rebellion of those 156 segregated soldiers of the Third Battalion occurred in reaction to the Houston escalating racist assaults and outright massacres all around them.

On Night In Miami: Award winning actress Reina King has crafted an amazing feat with her venture into directing - burrowing into the souls, emotions and politics of prominent black men back then, that night in February 25, 1964 in Miami. This fictionalized account finds boxing ring triumphant Cassius Clay and the soon to be Muhammad Ali (Eli Goree), Malcolm X (Kingsley Ben-Adir), Sam Cooke (Leslie Odom Jr.) and  Jim Brown (Aldis Hodge), debating racism, religion, FBI persecution, and the socio-political significance of emerging meaningful music in progress.

Escape From Pretoria: Based on the ordeal of filmmaker, author and actor Tim Jenkin, who happens to be the real life South African political prisoner and revolutionary fugitive on which this political thriller is based - and played by Daniel Radcliffe. His grueling predicament, the unimaginable escape from that maximum security prison, his continued struggle to set up a secret communications system to Mandela still behind bars, and the page to screen book he wrote about it all while playing a role in the movie as well, is extraordinary.

40 Years A Prisoner: Mike Africa Jr. revisits his six year old self during the police assault and murder of his family members at their MOVE home in Philly back then, all around him. Along with scenes from the jail cell where his incarcerated mother gave birth to him alone. Then his long struggle captured in this documentary, to free his parents since - political prisoners for four decades.  And what all of this has to do with Malcolm, Martin Luther King, Mumia, the Panthers, George Floyd and Breonna Taylor.

Best Foreign Film: Wasp Network.
Honoring the courage, bravery and sacrifice of the Cuban Five who posed as US defectors to defeat anti-Castro terrorist groups in Miami in the early 1990s and suffered the consequences, incarcerated here for decades. The docudrama bypasses the usual NGO financed propaganda productions, and pays tribute as well to the woman and wife of one who fought on their behalf, Olga Salanueva portrayed by Penelope Cruz

Movies About Women Saving Themselves: For a change, that is. This year counting: Radium Girls,  The real life dramatic feature detailing the horrific and deplorable radioactive poisoning of Jersey female factory workers. While their struggle to demand that the corporation face responsibility, resulted in strengthening occupational labor laws - and the right of individual workers to sue corporations for damages. And mystery character Etta, played by African American actress Susan Heyward, as a political filmmaker herself and a communist back then who gets it about Hollywood, and who turns up from the Tulsa Massacre.
Along With The Women Of... Judy And Punch, Devil To Pay, All Joking Aside, Intrigo: Dear Agnes.

Black Lives Matter Checking In... A continued reinvention of Hollywood crime and horror genres that began with 'Get Out.' And Antebellum, with its BLM influenced moments of Janelle Monae declaring homage to Assata Shakur, when not freeing herself from bondage as she incinerates the cruelty of a Southern slave plantation.

The Last Vermeer: Simultaneously convicted, cursed and celebrated in his lifetime, the notorious Dutch art forger Han van Meegeren symbolizes beyond his situation in this dramatic feature, the questionable US and European powers who today claim moral authority -  and continued assault in that regard against Third World countries they've targeted with genocide and exploitation for centuries. An elephant in the room, candid interrogation of what passes for truth or fabrication and self-proclaimed moral authority in history. And fueled by the deliriously elusive, perverse and mystifying Oscar-worthy performance of Guy Pearce. And, those eyebrows...

The Tobacconist (Der Trafikant) : Freud, fascism and a smokers guide to surviving history. One rural migrant's coming of age during the rise of Nazism in 1930s Vienna and Hitler's subsequent invasion of Austria, the young man's traumatic political transformation, and a chance encounter subsequent friendship with chain smoker Sigmund Freud. While moments of Freud wearily crashing on his own therapy couch out of historical exasperation, are indelible.

Best Movie Title: 'The Big Ugly' - A metaphorical reference to US imperialism in this Malcolm McDowell corporate crime thriller.

Best Film Not Coming Out Anywhere:  Wuhan Wuhan! - A remarkable journey capturing a cross-cultural collaboration with Chinese filmmakers in Wuhan shooting footage in Hazmat suits - as the pandemic was raging there. And, everyday people figuring out how to survive, endure - and how to help each other. Collective concern, not cash for care triumphs over the pandemic in China. And it goes without saying here that documentary directors with conviction step in as truth tellers, where the US media fear - or conspire - to tread. Unfortunately, MTV seems to have staged an intervention, claiming what appears to be the same production sources under a different name, for profit in this country.

Double Dose Of Acting Acclaim: The delightfully irreverent Latino actor and comic John Leguizamo is astonishingly eloquent as the unconventional teacher of an unlikely group of inner city high school students in Critical Thinking, who struggle against a racist education system - all the way to victory in a national chess tournament. And starring as well, as zany Detective Espada in Night Clerk, going eccentrically toe to toe with the autistic moonlighter in question.

Nomadland: Hollywood exploits the homeless crisis as cross-country great adventure by van. A pandemic wet dream escapist antidote in every worst sense of the word, Nomadland and its current breathless avalanche of critic accolades could not be further from its sobering reality. Exploiting pandemic free spirit fantasy rambler euphoria - while somehow making US socio-economic misery great again. No need for statistics on homeless female murders and rapes, and with essentially characters hugging and kissing their poverty. More Kerouac than Grapes Of Wrath.

Worst Film Critc: Dennis Harvey in Variety, mocking star Carey Mulligan, the date rape avenger in Promising Young Woman, as "not hot enough to portray the character." In effect perpetrating the lie that rape is about sex - not to mention emphasizing the need for more women film critics.

Posted by Solidaridad Press at 1:17 PM